A team of researchers replicated the methods used in the landmark study to see if anything has changed since then.

The results showed that, more than 20 years later, nurses remain invisible in the news.

The new study analyzed more than 500 articles across seven major print news outlets, three weeklies and three healthcare industry publications in September 2017. Researchers looked at the topic, article type, references to health care professionals, the wording of those references and gender of the professional referenced.

Of those articles, nurses were identified as sources in two percent of quotations during this period. Nurses and their profession were only mentioned in 13 percent of stories about health care. Nurses were also absent from photos–four percent of images in the articles identified a nurse. 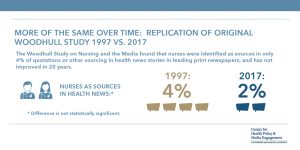 Where they did find nurses referenced or identified were in stories about labor, their general profession, education and quality of healthcare, but their voices were largely absent in articles about healthcare research, policy, the Affordable Care Act and business, researchers found.

The study also addressed the representation of women in the news articles, as nursing remains a woman-dominated field with an almost 10 to 1 ratio of female to male nurses nationwide, according to a report by the Kaiser Family Foundation.

Researchers found that, regardless of profession, men were quoted twice as often as women and showed in a majority of photos. 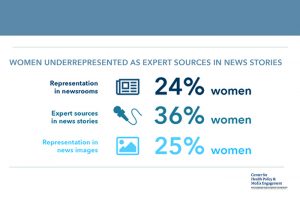 “Women are 51 percent of the population [in the U.S.] yet remain unrepresented,” said Cristal Williams Chancellor, director of communications for the Women’s Media Center who served as a reactionary panelist during a live stream presentation of the study. “We were not surprised but disheartened that nurses haven’t changed as well. Nurses are primarily women and the Women’s Media Center is dedicated to making them part of the narrative.”

The study did have limitations. Researchers were not able to include online-only health news media in the study, but the team didn’t expect it to greatly impact their findings, said Laura Nixon, a senior media researcher at Berkeley Media Studies Group.

“We would expect to see some differences, but print media news outlets still lead the agenda when it comes to news,” Nixon said.

Barriers to getting nurses in media

While the fix for this problem seems simple, the research team found several gaps keeping journalists from talking with and finding nurses to use as sources.

Decades-old editorial biases, processes or policies can get in the way of using or properly identifying nurses. Journalists also may not fully understand the scope of a nurse’s role or educational background, and they don’t know how to find nurse easily and within a limited timeframe.

“If we [healthcare journalists] need a source quickly, we tend to go to medical schools,” said Ivan Oransky, reactionary panelist and president of the Association of Health Care Journalists. “As journalists, we need to go to more diverse sources.”

Nurses, on the other hand, aren’t offered by universities and healthcare organizations as sources unless journalists explicitly ask for them–and in some cases, even when they do, said Diana Mason, PhD, RN, FAAN, senior policy service professor for the Center for Health Policy and Media Engagement at George Washington University School of Nursing and the study’s principal investigator.

In the third phase of the study, the team analyzed tweets from Sept. 2016 to Feb. 2018 of 47 top nursing schools in the U.S. to see how they promote their faculty or researchers as experts.

Of the 11,143 tweets containing at least one hashtag, a majority of the tags were targeted for communication between other schools and nurses, and not necessarily for igniting media interest. Members of the media also do not follow top nursing schools, representing 1.14 percent of followers across all the school accounts.

Pam Jefferies, Ph.D., RN, FAAN, ANEF, dean at George Washington University School of Nursing, said nursing schools “absolutely” need to do more at the baccalaureate and doctorate level to educate nurses on how to work with the press and talk about healthcare policy issues.

“Nurses need to have media competencies,” Mason said during the live stream. “Many nurses are afraid to talk to journalists.”

How to be heard

Members of the Woodhull Study Revisited research team and the reactionary panel offered advice for nurses and nurse faculty on how to get more nursing representation in the media.

We at Healthcare Traveler Today want to tell stories and report news that is relevant to all traveling healthcare professionals, including our travel nurses. If you have a story or news tip you would like to share, you can do it by:

The 5 Most Expensive States for Travel Nursing

Want to find positions in Florida now? Click here to check out the most recent posts on the StaffDNA job board. Most veteran...