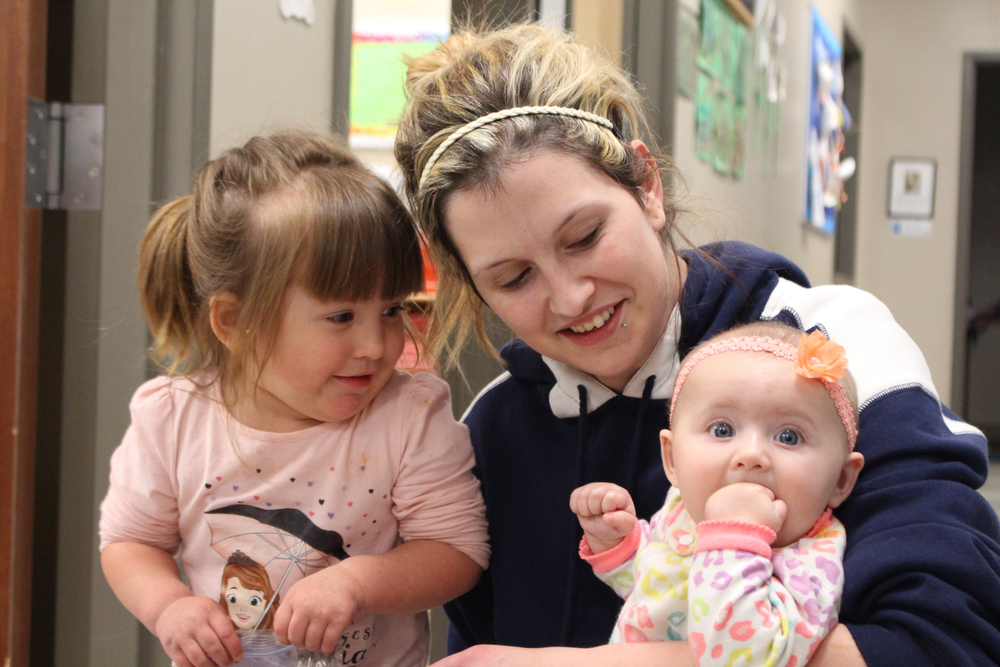 Amanda Williammee snuggles 2-year-old Taycee and 6-month-old Jayde after picking them up at Horizons. The program’s day care helps children “in more ways than one” with child therapy, speech help and “they literally give them everything they need,” Williammee says. Sarah Jane Tribble/KHN
Healthcare Roundup Industry Trends News

For The Babies Of The Opioid Crisis, The Best Care May Be Mom’s Recovery

CARRBORO, N.C. — The halls at UNC Horizons daycare are quiet at 5 p.m.

“I like to peek in on her and see what she’s doing before she sees me,” Williammee nearly whispers. “I love watching her, it’s too funny.”

There’s a dance party in progress and then Taycee spots her mom, screams and comes running to the door.

“Did you dance?” Williammee says, leaning down to her daughter.

It seems a typical preschool pickup, but it’s not. The University of North Carolina Horizons Program is a residential substance use disorder treatment center where mothers can bring their children. The kids attend school or daycare while mothers take classes and go to therapy sessions.

Williammee, 25, has struggled with addiction since she was a 19-year-old college student. She injected opioids during both of her pregnancies, and her babies were born with neonatal abstinence syndrome, which includes withdrawal symptoms like tremors, irritability, sleep problems and high-pitched crying. She remembers that withdrawals were harder for toddler Taycee than they’ve been for 6-month-old Jayde.

“It wasn’t just like we had this two-week period at the hospital of her being sick. Like, it went on for months because she did not sleep,” Williammee said, recalling that Taycee would sleep only for 20-minute stretches and needed constant swaddling. Sometimes, Williammee ran a warm bath for the baby to calm her.

“She’d wake up and just be miserable,” Williammee said. 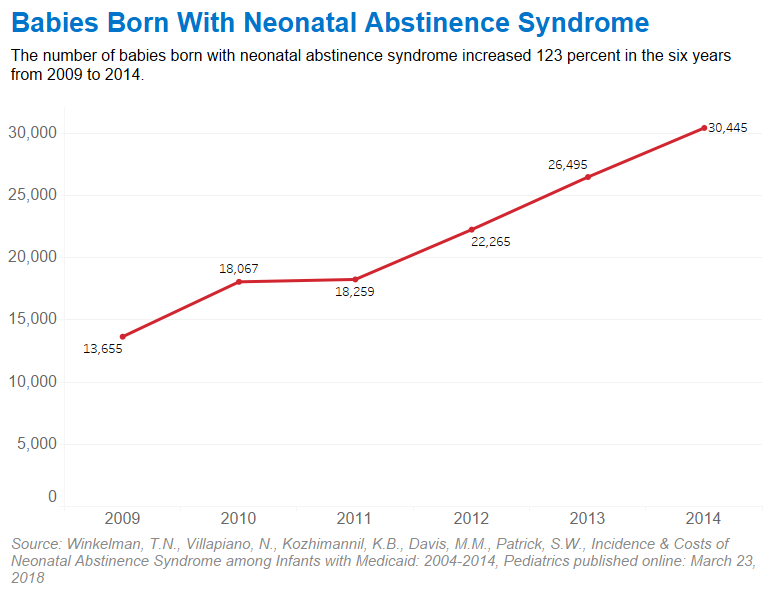 On average, a baby is born every 15 minutes in the U.S. withdrawing from opioids, according to recent research. That staggering statistic raises concerns among doctors, social workers and mothers like Williammee who worry about how drug abuse while pregnant affects a baby’s health.

Today, both Taycee and Jayde are developing normally. Still, Williammee wonders, how did the drugs affect their tiny bodies and brains?

Research is just beginning to point toward the answers. A recent international multisite study tracked nearly 100 children and their mothers, who were in medically assisted treatment during their pregnancy, for 36 months. Hendrée Jones is executive director at UNC Horizons and co-authored the study. She offered reasons to be optimistic.

“The children through time tended to score within the normal range of the tests that we had,” Jones said. 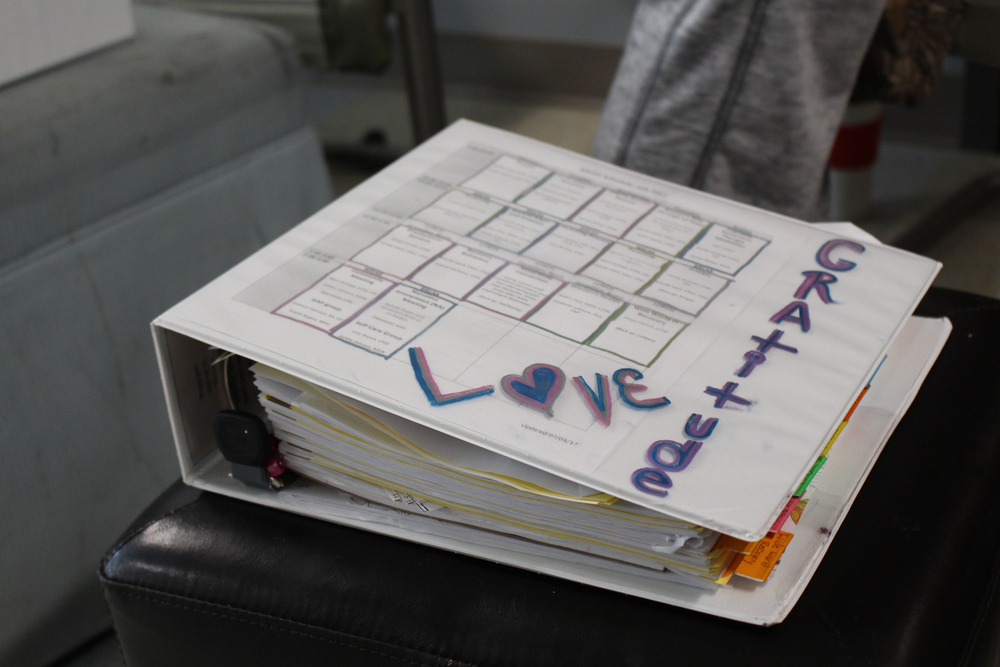 Each mother at Horizons receives a binder that includes their schedule of budgeting, parenting, employment services and group therapy classes. Kasey Morgan decorated her binder with positive messages and says “it’s really like you’re going back to school.” (Sarah Jane Tribble/KHN)

Dr. Stephanie Merhar, a neonatologist at Cincinnati Children’s Hospital, released a separate study after growing increasingly worried the past few years as she treated children coming in for checkups. Her team reviewed the two-year charts of 87 infants who had been diagnosed with neonatal abstinence syndrome at birth. Each child had been given a standard test for 2-year-olds that evaluated cognitive, language and motor skills — the same assessment used in Jones’ study.

What Merhar found was a call to action, she said.

“Most of these children do well and they do within the normal range,” Merhar said. “But it’s important to know that there is a risk for some delays and that these children are monitored closely.”

Still, exposure to opioids in utero does not appear to be as damaging as some other addictive substances. “It’s not like the fetal alcohol syndrome problem, where it really affects the brain,” Merhar said. “[Children with fetal alcohol syndrome] are at high risk of mental retardation and there’s significant developmental delays.”

Merhar’s analysis found that about 8 percent of the children had been treated for strabismus, or lazy eye, by age 3. A number of the children that Merhar studied also scored at least one standard deviation below the mean in cognitive, language and motor abilities.

The reason for those delays is unclear, though. Even more, the long-term outlook for the children is unknown, Merhar said.

National experts like Dr. Jonathan Davis, who chaired a Neonatal Advisory Committee for the Food and Drug Administration, said the current research is reassuring but the essential long-term research isn’t being done yet.

Davis, who is also chief of newborn medicine at Floating Hospital for Children at Tufts Medical Center, has passionately advocated for a national registry for babies exposed to drugs while in the womb. While current research doesn’t reveal any major motor, language, or cognitive delays, he said, it cannot answer questions like “How are these children going to function when they get to school? How are these children going to speak, socialize and interact?”

Researchers are quick to point out that fear spread nationwide about the children of the crack cocaine epidemic of the 1980s and early ’90s. Dire predictions of developmental delays turned out to be grossly exaggerated, according to the National Institutes of Health.

Dr. Lauren Jansson, director of pediatrics at the Center for Addiction and Pregnancy at Johns Hopkins Medicine, has treated mothers and babies since the early 1990s. When asked about how the babies will develop, she said, “The one solid thing we can say about children who are exposed to substances prenatally is that their mothers need treatment.”

The children, she said, are more likely to have optimal development if the mothers receive treatment. 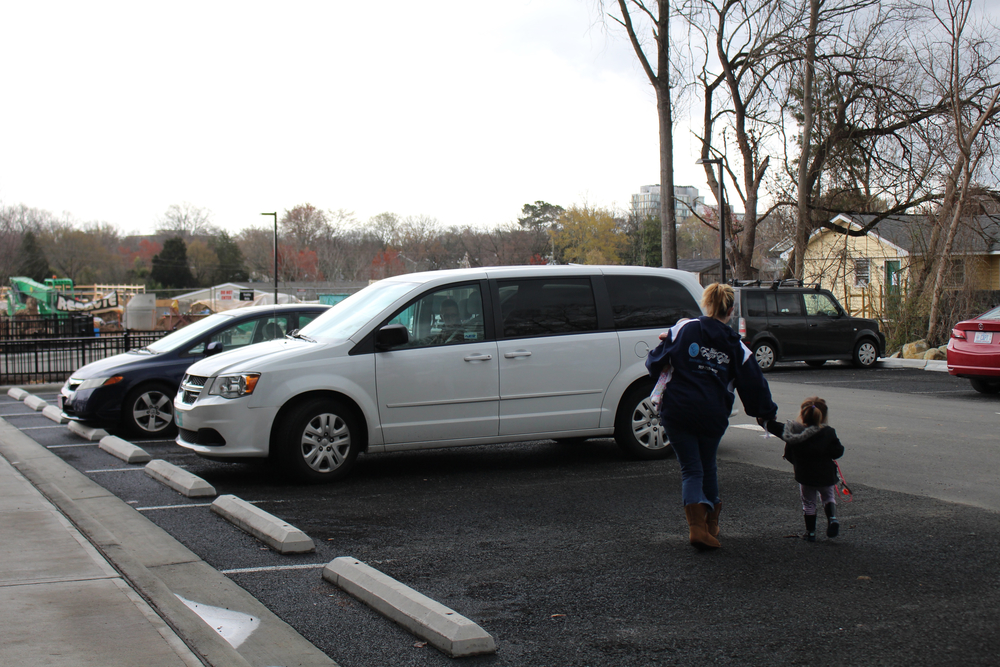 A white van drives mothers and their children to the treatment center each day from the residential apartments, where staff members at Horizons are on hand 24 hours a day. Each apartment has an intercom that can be used directly to call the staff office for help. (Sarah Jane Tribble/KHN)

UNC Horizons opened its program in 1993 because of the cocaine epidemic. Since then, Jones said, it has become clear that the lives of people with substance use disorders — whether involving cocaine or opioids — can be very chaotic, and that can affect children, too.

Most of the mothers at UNC Horizons took multiple substances when pregnant and also experienced trauma, abuse or neglect in their own childhoods. And, Jones said, that can be hard to overcome.

“There’s oftentimes an unrealistic expectation by society. They’re supposed to automatically know how to quote, unquote … be good mothers, how to be nurturing mothers,” Jones said. “That’s like trying to teach somebody algebra when they’ve never even had addition.”

The mothers enrolled in UNC Horizons often spend months in the residential program. They live in apartments that have intercoms connected to an office staffed 24 hours a day. Trained staff members administer their medication-assisted treatment, drive them to and from the treatment facility each day and are on hand to answer questions or respond to crises.

During a recent Tuesday morning group therapy session, about a dozen mothers sat in a circle of comfortable chairs with ottomans in front of them. Two newborns snuggled on their moms’ chests as Jones talked about gratitude. She asked each of them to name something for which they were grateful.

One mother simply shook her head and said she was thankful for being able to remember things she does with her kid: “I’m grateful to remember, to feel,” she said to the group. Others said they are grateful not to be sleeping in a car, or consumed with searching for their next fix.

Williammee, who began treatment for the third time in February, was quiet.

A few days later, during an interview at her homey, staff-monitored apartment, she described why this time will be different.

“It’s going to work. It is,” she said. “’Cause I’ve got a lot of tools to take with me and use in my life to stay clean, instead of using drugs to cover up my feelings when something’s hard.”

And, this time, child protective services have threatened to take Taycee and Jayde, who were napping in the next room as Willammee spoke.

“I’m not just some drug addict,” she said. “I’m a mother of two kids, and I feel like I’m a great mother. I have educational goals I plan to accomplish, and I plan on being a productive human being in our society.”

Williammee said she hopes to finish her last year and half of college and become a teacher.

As Syphilis Invades Rural America, A Fraying Health Safety Net Is Failing To Stop It (KHN)