An Update On Medicaid Expansion Efforts and How They Affect Travelers

As we move closer and closer to November midterm elections in the U.S., healthcare access and quality issues have become a heated political battleground for legislators and citizens across the political spectrum.

Medicaid expansion, a tentpole policy part of the Affordable Care Act passed in 2010, is one of the key divisive topics in this realm. It’s also something healthcare providers—and by extension travel healthcare professionals—are keeping an eye on, as expansion can have an impact on provider funding and patient care.

What Is Medicaid Expansion?

Under the Affordable Care Act, states can expand Medicaid eligibility to nonelderly adults with incomes at or below 138 percent of the federal poverty level, which equals about $16,700 a year for a single person and $34,600 for a family of four.

Expansion states are funneled billions of dollars from the federal government to support expansion efforts and coverage for newly insured populations. In states that haven’t expanded, those adults fall into a “coverage gap” for having incomes above traditional Medicaid eligibility but below the limit to get approved for ACA marketplace premium tax credits.

So far 34 states have approved Medicaid expansion, two states—Maine and Virginia—are in the works to implement expansions, and three states—Idaho, Utah and Nebraska—could potentially approve Medicaid expansion this year. 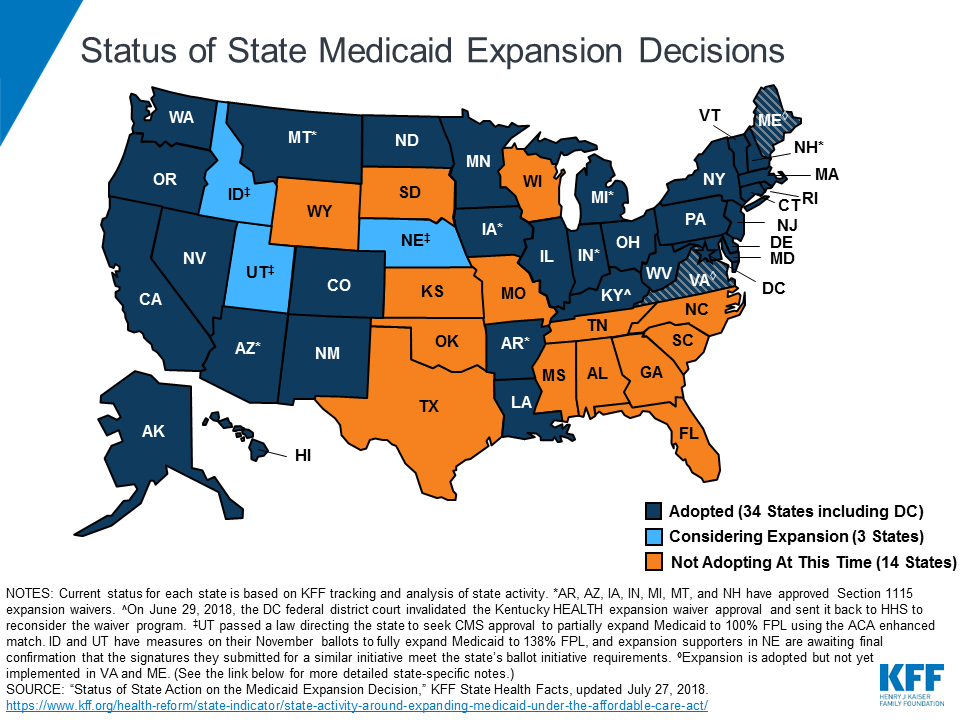 Why is Medicaid expansion important to travelers?

Simply put, hospitals in states that expand Medicaid can expect to see a new influx of patients looking for care on a regular basis which can affect seasonal staffing needs. A Commonwealth Fund study in 2015 found that 4 out of 10 primary care physicians who accepted Medicaid saw an increase in patients after expansion coverage took full effect.

Additionally, studies have shown that hospitals in expansion states have much healthier budgets, which can leave more money on the table for hiring and retaining temporary or permanent staff. According to an analysis by the Kaiser Family Foundation, expansion hospitals saw “significantly improved hospital operating margins.”

These factors don’t completely guarantee that facilities in expansion states will overflow with traveler needs, but it can help prevent razor-thin hospital budgets and get executives thinking about how to ease the burden on their permanent staff.

What’s happening in states with plans for Medicaid expansion?

Medicaid was supposed to be available to newly eligible Maine residents on July 2, but a series of appeals and heated courtroom battles have kept expansion in limbo, leaving more than 70,000 without coverage.

At the heart of the issue is Republican Gov. Paul LePage, who has vetoed Medicaid expansion efforts six times in office. Mainers approved Medicaid expansion through a referendum vote with a 59 percent voting majority in 2017, but LePage refuses to submit a plan to the federal government until sufficient state funding—under his terms—is found.

LePage was ordered by a Superior Court justice to submit a plan in June, but his administration appealed the ruling to the Maine Supreme Court, saying they did not have to file a plan during the appeal process.

Arguments for the appeal took place on July 18, but the court has yet to make a decision.

You can view a more detailed timeline of the events leading up to the court hearing by clicking here.

Advocates in Idaho successfully petitioned and gathered 75,314 verified signatures to add a Medicaid expansion measure to the ballot this November.

The petition met both state requirements to qualify the ballot measure, gathering at least 56,192 verified signatures that represented at least 18 of Idaho’s 35 legislative districts, according to Ballotpedia.

Utah Gov. Gary Herbert signed a bill on March 27, 2018, for partial Medicaid expansion, directing the state to seek federal approval to expand Medicaid to 100% of the federal poverty level.

The bill stipulated using the ACA enhanced federal match rate and adding a work requirement for the expansion population. To date, the Center for Medicare and Medicaid Services (CMS) has not approved waivers to access the match rate until Utah approves a full expansion.

In the meantime, Utah expansion advocates garnered enough petition signatures to add a competing bill to November ballots that would approve a full expansion.

Similar to Idaho and Utah, Nebraska advocates have submitted a petition to add a Medicaid expansion initiative to the midterm election ballot this fall.

Supporters filed more than 133,000 signatures on July 5, but the Secretary of State office is still verifying the signatures. At least 84,908, or more than 60 percent, of the signatures need to be valid for the initiative to make the ballot.

By Alex McCoy, Contributing Writer, Owner of Fit Travel Life Editor's note: Stocking Up is a three-part miniseries that...