Already know all about Question 1 in Massachusetts? Click here to read about how this could impact travel nursing in the state.

Massachusetts nurses are arguing on both sides of the fence in the first wave of TV advertisements about a ballot initiative that would regulate nurse staffing ratios in the state, according to a Boston Globe report.

The Massachusetts Nurses Association, which sponsored the initiative, supports the Committee to Ensure Safe Patient Care along with many other local labor unions both in and out of the state. The committee argues that safe staffing ratios in non-ICU units will cut down on patient complications, readmissions, errors and potentially life-threatening risks.

The Coalition To Protect Patient Safety, an anti-initiative group backed by state hospital groups and local chambers of commerce, argue that adopting a rigid proposal will “take decision-making power out of the hands of healthcare professionals” and negatively impact hospital costs and quality of care.

While both groups stances on Question 1 are clearly opposed, their similar advertising and marketing strategies could cause confusion for uninformed voters, according to the Globe report.

Both groups have similar names, use nurse testimonials in their website advertisements, feature similarly designed lawn signs and even have nearly identical Twitter handles. (Pro-initiative @PatientSafetyMA and anti-initiative @MAPatientSafety) 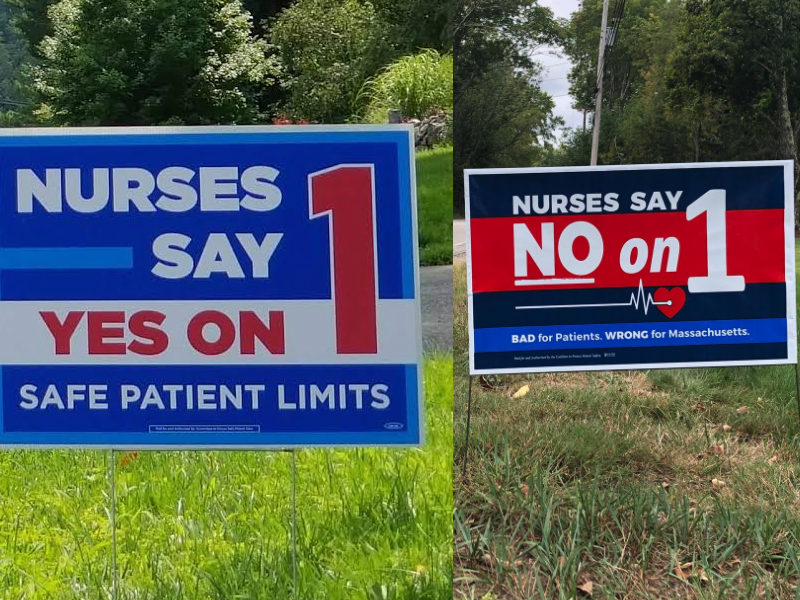 Both groups are ramping up advertising efforts ahead of the Nov. 6 midterm elections. If approved by voters, the initiative would establish patient limits determined by the type of medical unit or patient with whom a nurse is working, and the limit would be applied at all times, according to the Massachusetts Secretary of State website.

Civil penalties for hospitals that don’t comply with the mandated ratios could go up to $25,000 per violation, along with $250-2,500 in fines per day for facilities that don’t have information about the limits in all patient rooms, units and patient areas.

How “Yes” On Question 1 Could Affect Travelers

In short, mandated nurse-to-patient ratios across the state could sharply increase nurse recruiting and retention efforts by hospitals, which in turn could increase the amount of travel nurse needs.

While multiple states have laws relating to nurse staffing ratios, only California has both passed and implemented mandatory statewide ratios. The state passed the law in 1999, implemented it completely by 2004, and since then has been the source of numerous studies about the impact of mandated ratios.

A 2008 study submitted to the Journal of Hospital Medicine found that nurse staffing in California remained unchanged from 1993 to 1999, but facilities significantly increased staffing efforts between 1999 and 2004.

As of 2017, the state had the highest number of registered nurses in the U.S. at 282,290, according to Bureau of Labor Statistics data. It also holds the top spot for the number of active nursing licenses with more than 432,000 as of Sept. 8, according to National Council of State Boards of Nursing data.

There are other factors to consider when determining why California brings in so many nurses—geographic diversity, lots of rural communities, high paying contracts—but many staff and travel nurses cite mandated ratios as a positive benefit of working in the state, which could help with hospital recruiting.

Pour a hot cup of coffee or tea and thaw out those fingers—it's time browse this week's highest-paying jobs, straight from the...