It’s beginning to look a lot like flu season.

While some media outlets are already forecasting grim outcomes for the 2018-19 flu season, current data from the Centers for Disease Control and Prevention tells a different story.

Influenza activity remained low in early November, but has increased slightly in the past two weeks, according to the recent CDC Weekly U.S. Influenza Surveillance Report, most notably at the local level in Louisiana, Georgia and Oklahoma.

During Thanksgiving week, Louisiana and Georgia jumped from “moderate” to “high,” according to CDC data. Alabama, Oklahoma and Utah experienced “moderate” levels of activity and the remaining U.S. territories and 37 states saw “low” to “minimal” levels, according to the report. 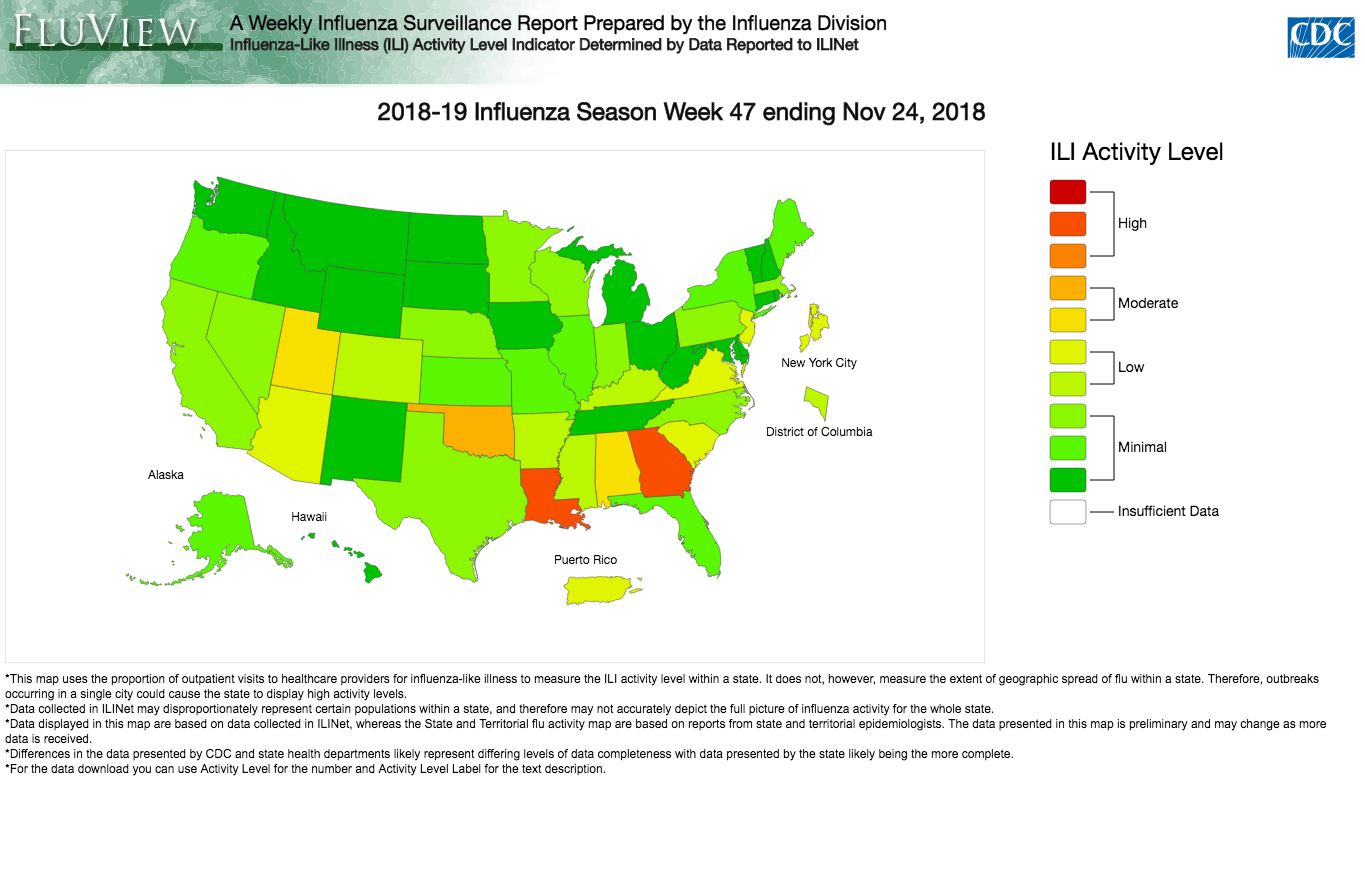 Data via Centers for Disease Control and Prevention

“The increase in the percentage of patient visits for ILI (influenza-like activity) may be influenced in part by a reduction in routine healthcare visits during the Thanksgiving holidays, as has occurred in previous seasons,” the report reads.

Two pediatric deaths have been reported so far in the flu season, both of which occurred in Florida and in unvaccinated children, according to the state’s health department. During the 2017-18 season, 171 pediatric deaths and an estimated 80,000 deaths total occurred.

Despite a slow start, travelers may need to keep their eyes out for more flu activity in the coming weeks. Here are some key takeaways to consider:

The most widely reported strain of the virus is H1N1, which could actually be a good thing

There are currently three strains of the flu virus circulating in the U.S., the most prominent of which right now is an A-type H1N1 virus, which is also known as the “swine flu” strain responsible for the 2009 pandemic.

While that sounds somewhat terrifying, it may actually be good news. Most of the devastation caused by the flu during the 2017-18 season was from an A-type H3N2 strain, which found in more than 80 percent of laboratory-tested samples from patients.

This year’s vaccine contains the same A(H1N1) component as last year, along with updated A(H3N2) and B-type components, which could provide much better protection against the spread and severity of the flu.

Southern states are often the first to show high levels of flu season activity and hospitalizations.

Just like the current year, Louisiana and Georgia showed moderate-to-high levels of flu activity in 2017 during Thanksgiving week—but so did Mississippi and South Carolina. 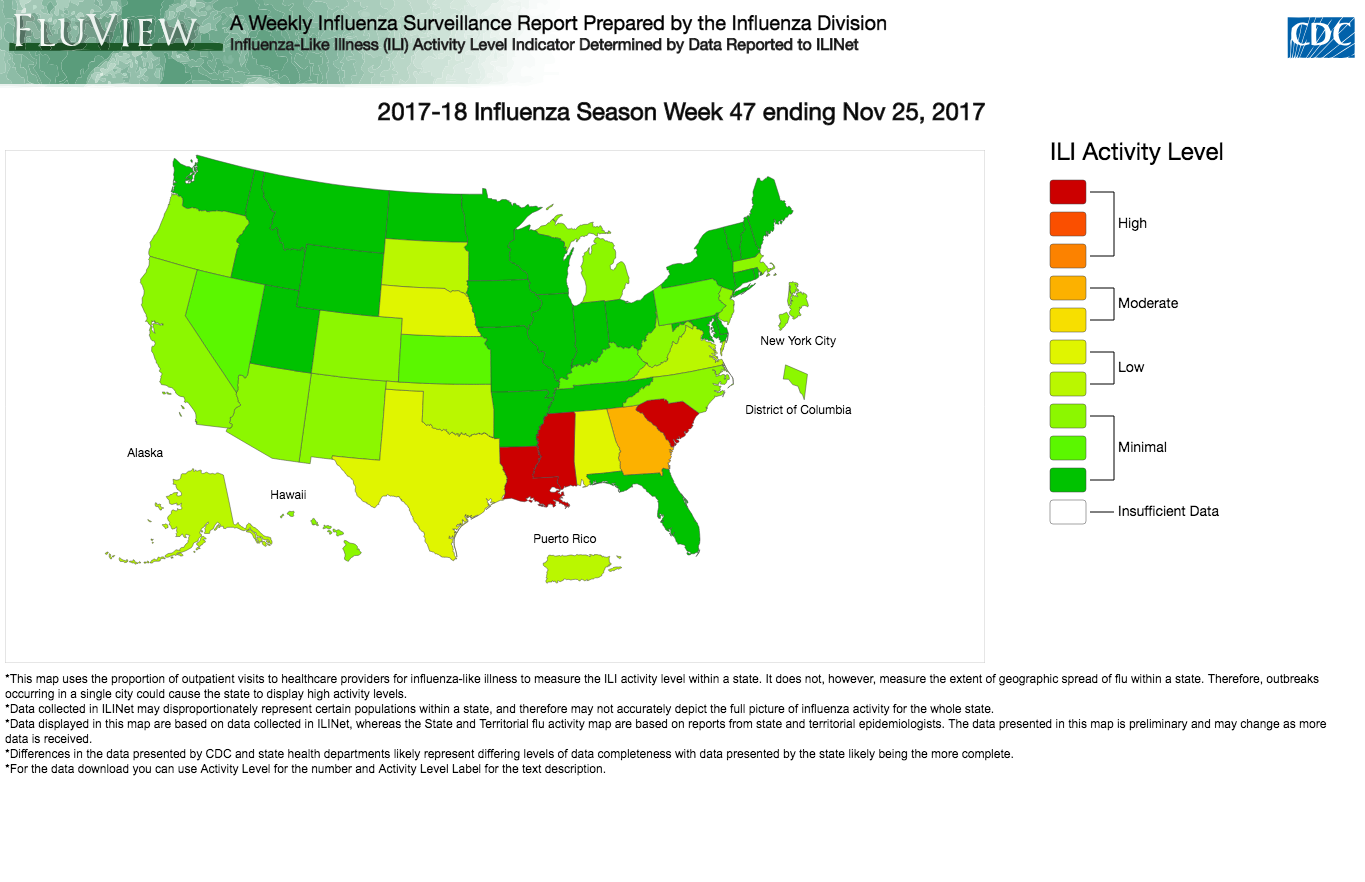 Data via Centers for Disease Control and Prevention

Within three weeks, four more Southern states—Alabama, Arkansas, Oklahoma and Texas—showed high levels of activity in December. This was similar to the 2016-17 and 2014-15 seasons, where flu activity reached its peak the earliest and stayed high the longest.

Hospitals in these states are aware of this trend, and many began recruiting travelers in August to prepare for an early flu season.

In most years, high levels of hospitalizations for flu-like activity occurs between the last week of December and early January.

Travelers can reasonably expect to see patient census—and potentially job needs—increase because of rising flu activity over the next three weeks in the following states:

On the heels of a five-year legislative battle, Virginia lawmakers voted to expand Medicaid this week, which is poised to bring in...