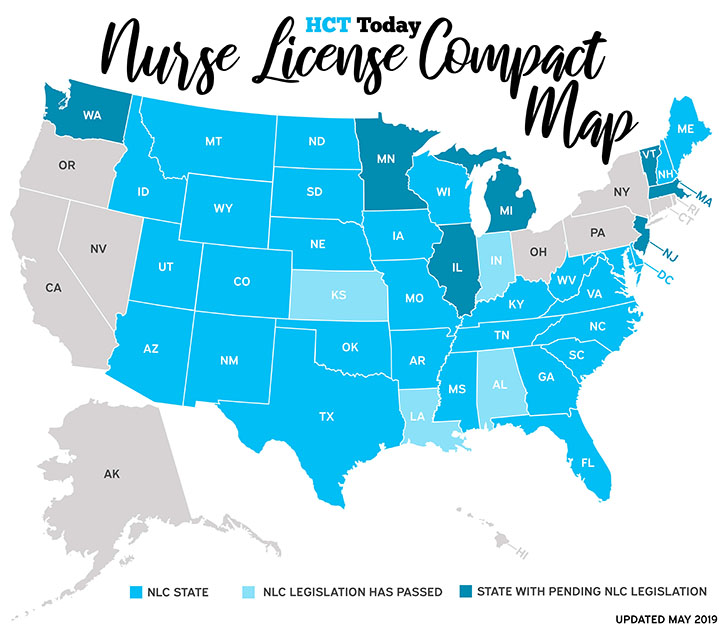 Alabama Governor Kay Ivey signed the nursing compact license bill into law last week, according to a Facebook post from the Alabama Board of Nursing. The board expects to fully implement eNLC processes and issue compact nursing licenses by January 2020.

Healthcare Traveler Today will update this story with more details if and when they become available.

Alabama legislators approved a bill for the state to participate in the Nursing Licensure Compact on Thursday, according to a Facebook post by the Alabama Board of Nursing.

Senate Bill 38, introduced by House Rep. April Weaver and Senate Rep. Greg Reed, was unanimously approved by the House and will head to Gov. Kay Ivey’s desk for final approval.

Alabama would become the 33nd state to join the enhanced Nursing Licensure Compact if approved, which allows for registered nurses and licensed practical nurses to practice in multiple states without having to apply for multiple single-state licenses.

The Alabama Board of Nursing and supporters of the bill praised the effort on social media, thanking Sen. Reed and Rep. Weaver for introducing the bill.

Board members voiced their support of the bill in February after what they said was “very intense, detailed analysis” in September 2018.

“The ABN believes this will help alleviate the current nursing shortage, especially in rural areas, and reduce regulatory barriers in Alabama,” the board said in their Winter 2019 newsletter.

Alabama and Louisiana were the only two states in the southern region of the U.S. who did not join the enhanced NLC when it was enacted last year on January 19. Louisiana passed an NLC bill in June 2018 and is expected to fully implement compact license privileges on July 1 along with Kansas.

Alabama’s eNLC bill would go into effect within three months of the bill’s signing date if approved, according to the bill’s text.

Traveler Tips: How To Work With Multiple Travel Healthcare Recruiters

By Alex McCoy, Contributing Writer, Owner of Fit Travel Life When I explain to non-healthcare friends and family that...